Puno is the folklore capital of the highlands, and it is the party and legend of the Titicaca coast. The Puno area “settled on the Andean plateau,” dominated by Lake Titicaca. Lake Titicaca is the holy land of the Incas and consists of natural and artificial islands.

It has a dome of pre-Spanish archaeological sites, and from their origin, chullpas are called “tombs.” Its church features evident colonial architecture. Puno is a town proud of Quechua and Aymara’s past. During Candelaria’s Maiden’s Day, folk traditions flourish yearly in dances and ceremonies.

With a trip to Puno and Lake Titicaca, you can learn more about your perfect itinerary, accommodation options, and prices. The recommended minimum time for essential visits to Puno and Lake Titicaca is three days. A single trip is not enough to discover all the wonders of the Puno Andean highlands. Due to the convenient connection of flight or bus service. For lovers of ancient culture, we recommend Tiwanaku. We also offer tours and travel packages from Puno, Peru, to the best locations in Cusco, organized by destination, trip, or combination. 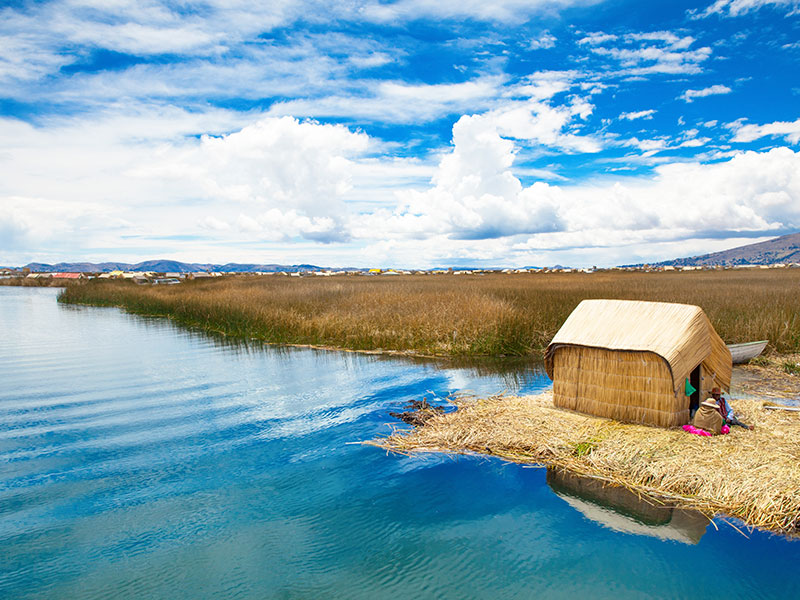 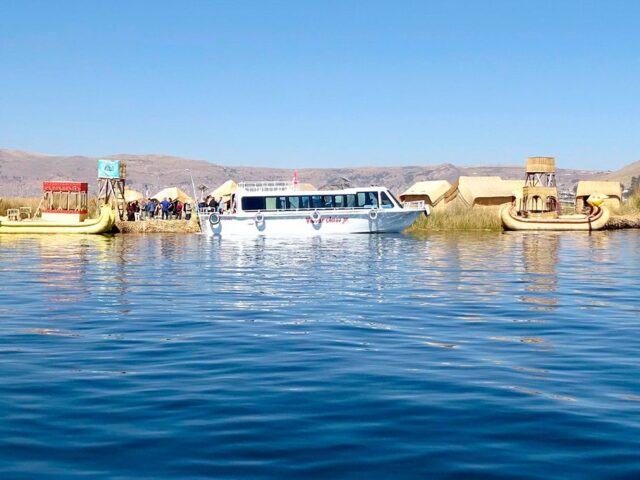 Duration: 03 hours
Price: from $ 36.00
The floating island of the Uros is an excursion that lasts approximately 3 hours. From the port of Puno by boat, it take
VIEW EXPERIENCE 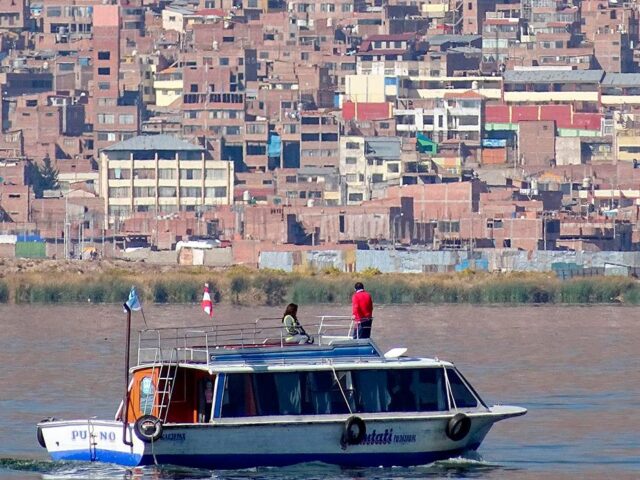 Duration: 1-Day
Price: from $ 113.00
Lake Titicaca is one of the highest navigable lakes. People from the Aymara Inca culture decided to take possession thou
VIEW EXPERIENCE

Duration: 2-Days
Price: from $ 154.00
This Uros & Amantani Island Tour is a trip through Lake Titicaca and the Andes of Puno; on this epic journey, we head to
VIEW EXPERIENCE 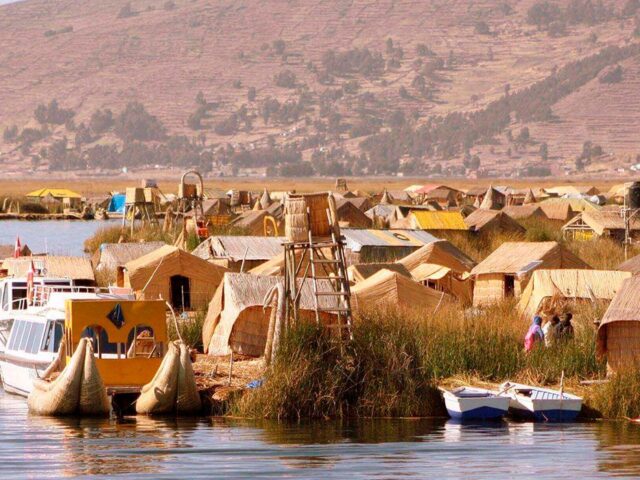 Duration: 1-Day
Price: from $ 83.00
Chucuito is located 18 kilometers from the city of Puno; in Chucuito, we find the phallus temple representing male ferti
VIEW EXPERIENCE 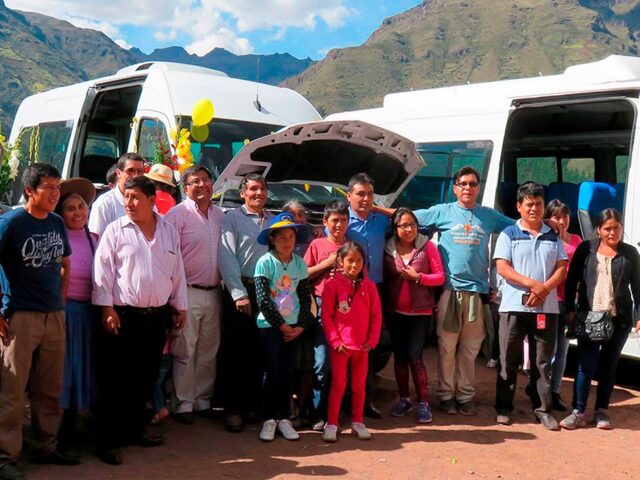 Cusco to Puno by Car

Duration: 1-Day
Price: from $ 122.00
Travel by vehicle from the city of Cusco to Puno, a site where the highest navigable lake in the world is called Titicac
VIEW EXPERIENCE 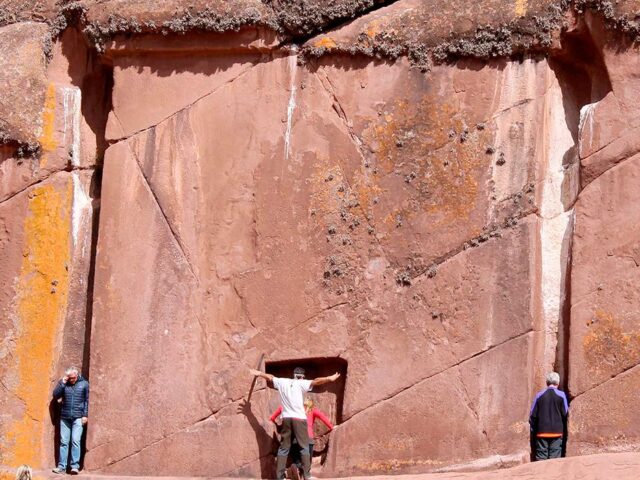 Duration: 3hrs
Price: from $ 49.00
In Aramu Muru Portal, a 3hrs tour, we have a magical place where we feel the positive energy of Ajayu Marca's doorway lo
VIEW EXPERIENCE 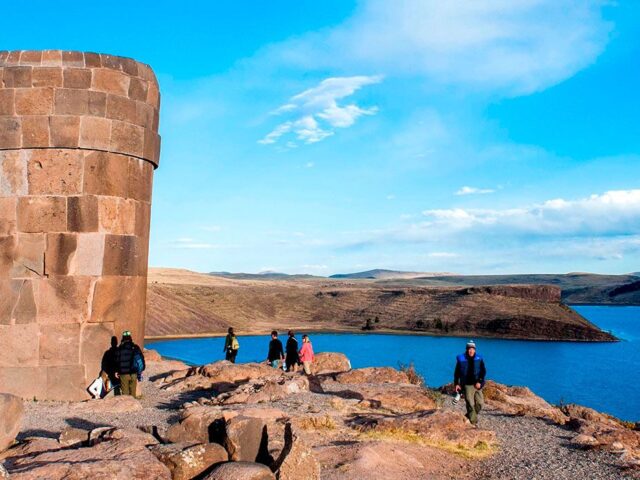 Sillustani Tour 03 hours and a half

Duration: 3 hours & a half
Price: from $ 36.00
Venture on a Half-day Sillustani Tour of Peru through time and explore the enigmatic ruins near Puno. Sillustani: Each s
VIEW EXPERIENCE 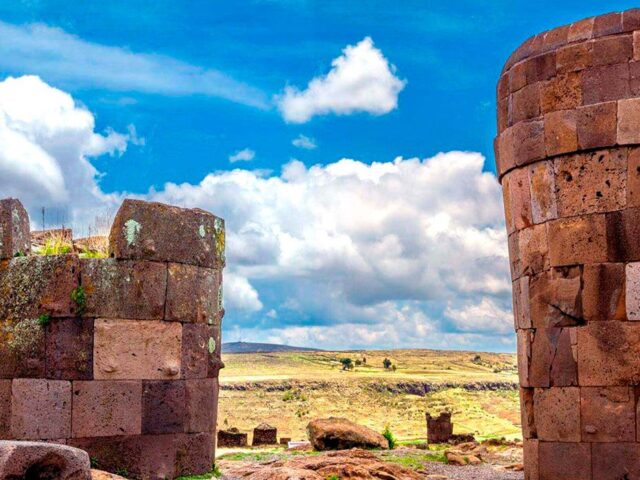 Duration: 6 hours & a half
Price: from $ 74.00
The Chullpa of Cutimbo has located 18 km from the city of Puno. The funerary towers are square, built on top of a hill t
VIEW EXPERIENCE 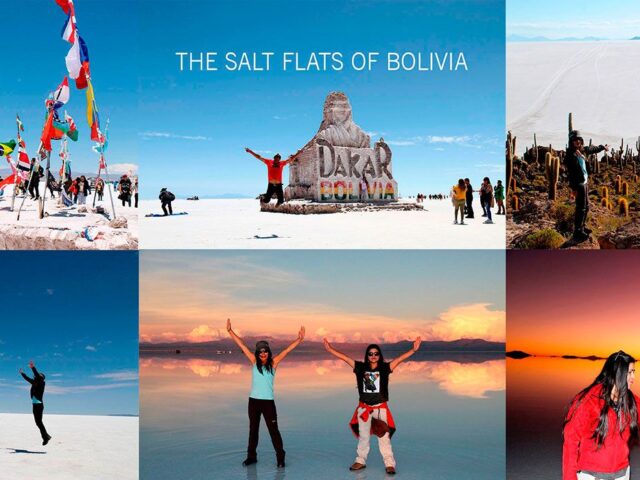 Duration: According to requirement
Price: from $ .00
The Uyuni salt flat Tours is the largest continuous salt desert globally, with an area of 12,000 km² about 120 meters d
VIEW EXPERIENCE 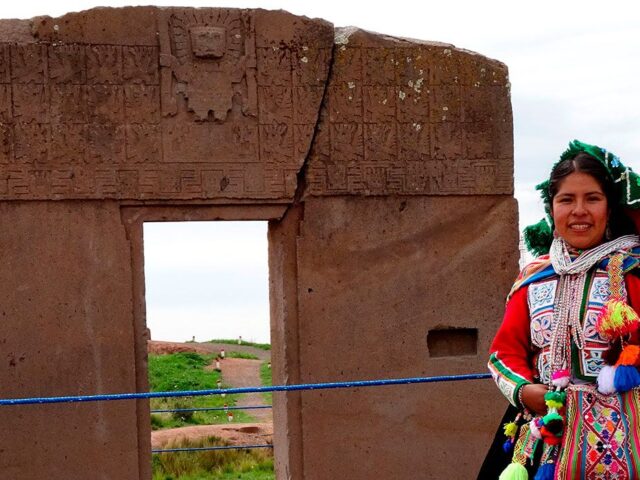 Duration: 1-Day
Price: from $ 87.00
Tiwanaku Tour Full day is an epic journey to explore the enigmatic ruins of the ancient temple built by the ancestral hu
VIEW EXPERIENCE 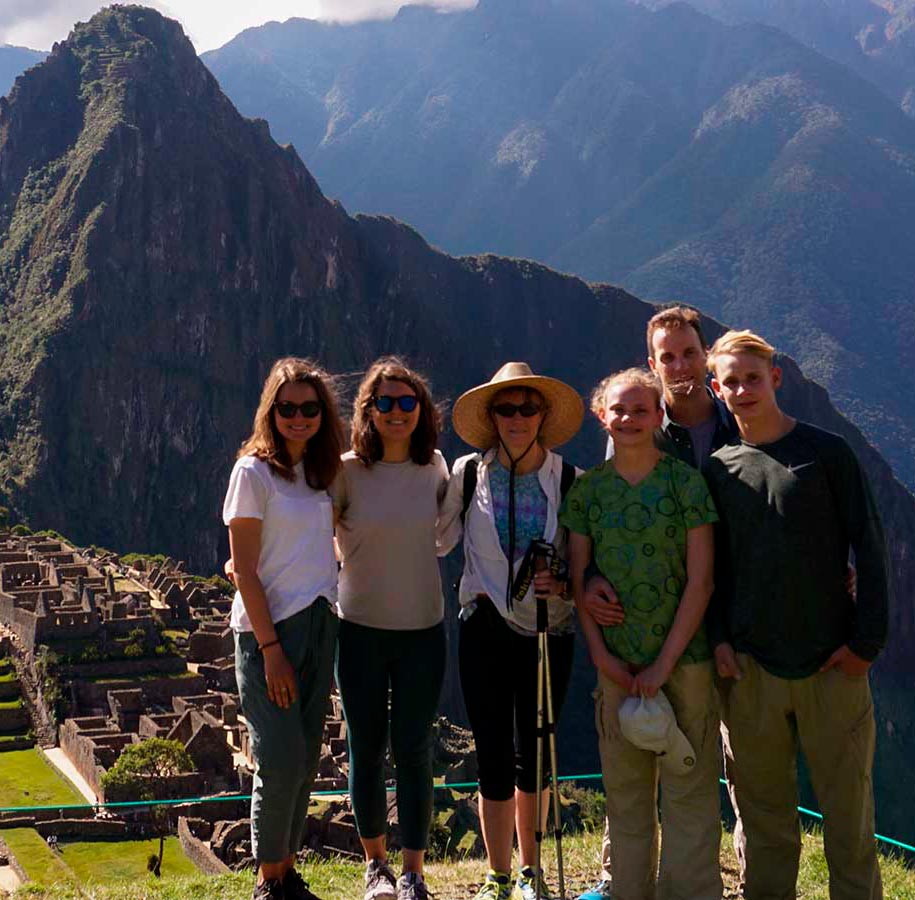 Puno is a “city of holy lakes” because Lake Titicaca is located on its land and is famous for the myths that originated from the legends of Manco Capac and Mother Ocllo.

Among the tourist attractions in Puno, the Plaza of Arms and other places are recognized, and in the center, you can find a statue reproducing Francisco Bolognese’s image. The square does surround by influential political and religious sites in the area. One of them is the Puno Cathedral, built under the protection of Our Lady of the Immaculate Conception in the seventeenth century. It is today part of the country’s cultural heritage.

Another engaging resource for religious tourism in the city is the San Juan Temple, also known as the Sanctuary of Our Lady of Candelaria, which is now considered a national cultural heritage and is only 300 meters from the Plaza de Armas. Many museums near Puno Square, including the Carlos Dreyer Museum, are 100 meters away from the Plaza de Armas. This museum consists of a two-story building with 08 rooms, which houses the Inca Room, the Regional Archaeology Room, the “Treasures of Sillustani,” Carlos Dreyer’s paintings, and Laykakota Circle, etc.

Puno does locate in southeastern Peru, on the Shore of Titicaca Lake. The capital of the state of Puno is Puno city, with a population of 110,000. The town was established in 1668 by Viceroy Pedro Antonio Fernandez de Castro as the capital of the province of Paucarcolla with the name San Juan Bautista de Puno. Later, the name was San Carlos de Puno in honor of King Charles II of Spain. Puno has several churches dating back from the colonial period, and they did build to service the Spanish population and evangelize the natives.

Today, Puno is an important agricultural and livestock region, particularly in the southern plains. Much like surrounding cities, many homes in Puno are half-finished, particularly in the South, so the inhabitants do not have to pay taxes. Much of the city’s economy relies on American camels (llamas and alpacas), which graze on its immense plateaus, and the black market, fueled by cheap goods smuggled in from Bolivia. Puno has become a Special Economic Zone by one of Peru’s presidents. Puno does serve by the Inca Manko Capac International Airport located in Juliaca.

Climate: With significant temperature variations between day and night. The ideal time to visit is between May and October when the days are sunny, there is sporadic rainfall, and the daily temperature reaches 25°C / 77°F. The nights are cold (though rarely below 0°C / 32°F).

Access:
There are scheduled flights to the city of Juliaca, about an hour’s drive to Puno.
By road from Cusco to Puno, 8 hours 345km
By road from Arequipa to Puno, 7 Hours

Services: The infrastructure (accommodation and meals) is abundant in Titicaca Lake.

The area offers extraordinary fauna composed of ducks, fish such as search, the Capache, trout, alpacas, and llamas. The flora comprises reeds used as food and building material to pair houses and canoes.

Uros is a small islet of reeds ancestrally inhabited by traders and fisherfolk; it is a beautiful community located six kilometers into Titicaca. Today manages to sustain its tradition and receive tourist groups who observe their particular way of life and customs.

This is a peaceful Island on Titicaca Lake, situated 35 Km / 21.7 miles (4 hours by boat) east of Puno. There are no roads or electricity in Taquile, but plenty of hills, archaeological ruins, and temples. Tiered platforms dominate the landscapes with potatoes, corns, quinoa, and broad beans cultivated; ceremonial sites host rituals imploring abundant harvest and fishing and the hospitality of the Aymara people, which do so outstandingly organized. The textile industry is this island’s main activity, and the garments they manufacture relate to their daily chores.

This island is located 36 kilometers from Puno city, characterized by the presence of bushes. It is interesting to visit the two natural views. You can see the remains of pre-Hispanic Pacha Tata temple of Pacha Mama, Inca Chinkana, Tihana, and Inca mummies Cemetery.

Sillustani is located 34 km / 21.08 miles from Puno city. Famous for the Chullpas: circular stone towers erected to house the remains of the prominent leaders of the early settlers of the Collao. A short distance from the resort, doe locate the site museum, which preserved various parts of cultures Kolla, Inca, and Tiawanaco.

Juliaca is the largest city in the department of Puno and the famous commercial center of llamas and alpacas.

19 km / 11.78 miles from Puno city, this beautiful place has a magnificent church: Our Lady of Assumption and a small Inca temple dedicated to fertility.