On the approach to OLLANTAYTAMBO from Urubamba, the river runs smoothly between impressive Inca terraces that gradually diminish in size as the slopes get steeper and rockier. The rail tracks reappear just before the town, and the road climbs a small hill to an ancient plaza.

The backstreets radiating up from the plaza are littered with well-built stone water channels, which still come in handy during the rainy season, carrying the gushing streams tidily away from the town and down to the Urubamba River. Ollantaytambo was built as an Inca administrative center rather than a town and laid out as a maize corn cob.

It’s one of the few surviving examples of an Inca grid system, with a plan seen from vantage points high above it, especially from the hill opposite the fortress. An incredibly productive sector of the Urubamba Valley, at 2800m above sea level and with temperatures of 11–23°C (52–73°F), with good alluvial soils and water resources, this area was also the gateway to the Antisuyo (the Amazon corner of the Inca Empire) and a center for tribute-gathering from the surrounding valleys. 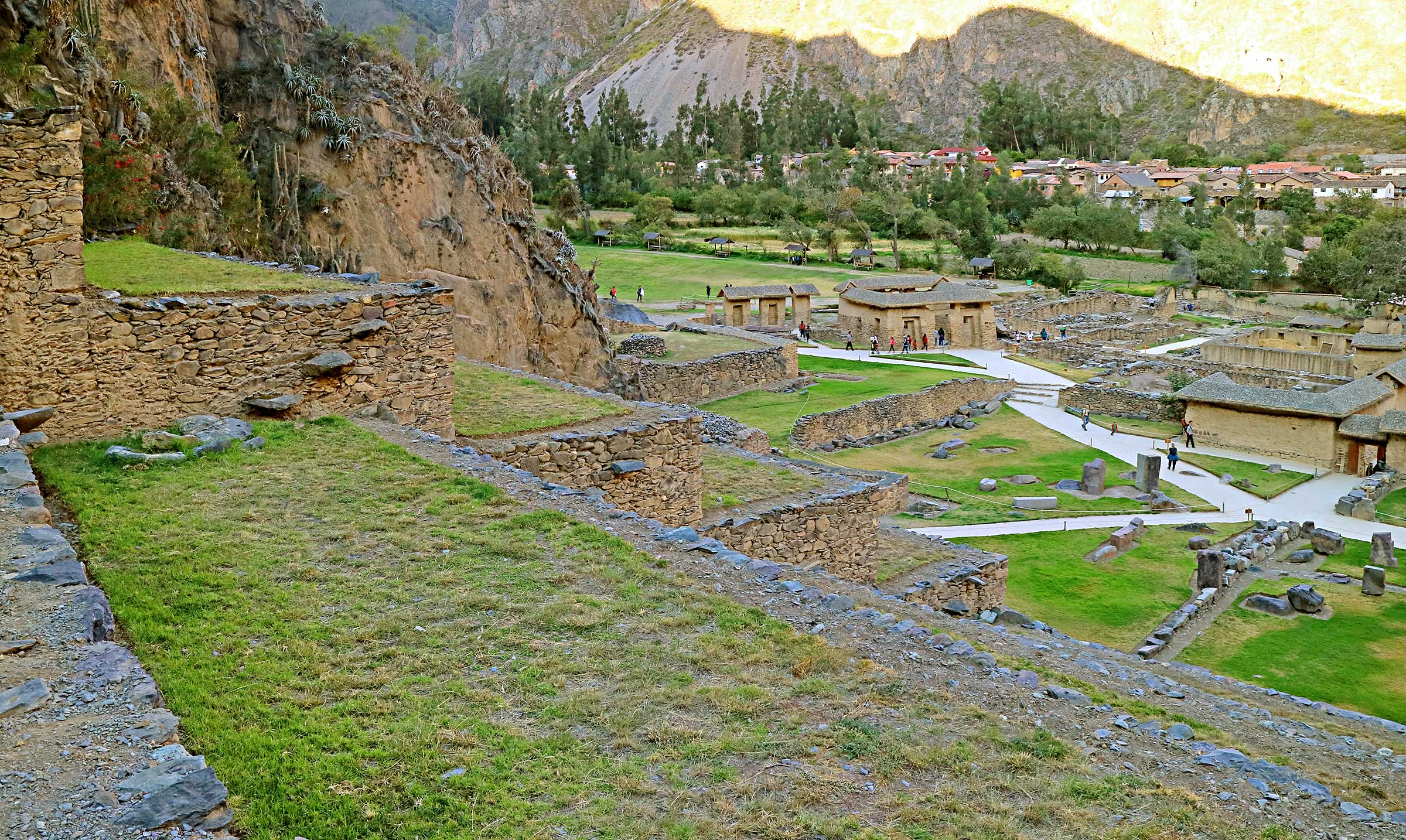 Beyond Ollantaytambo, the Sacred Valley becomes a subtropical, raging river course, surrounded by towering mountains and dominated by the snowcapped peak of Salcantay; the town is a popular base for rafting groups.

The valley is hemmed in by steep and very high mountains, many with snow-capped peaks. As one of the region’s main hotspots, and a well-used overnight stop en route to Machu Picchu, it can get bustling here in high season, making it hard to escape being around scores of other travelers.

At heart, though, it’s a small but very traditional settlement. Many local women still wear traditional clothing, and it’s common to see them in the central plaza with their intricately woven manta shawls, black and red skirts with colorful zigzag patterns, and red and black hats.

Some history of Ollantaytambo 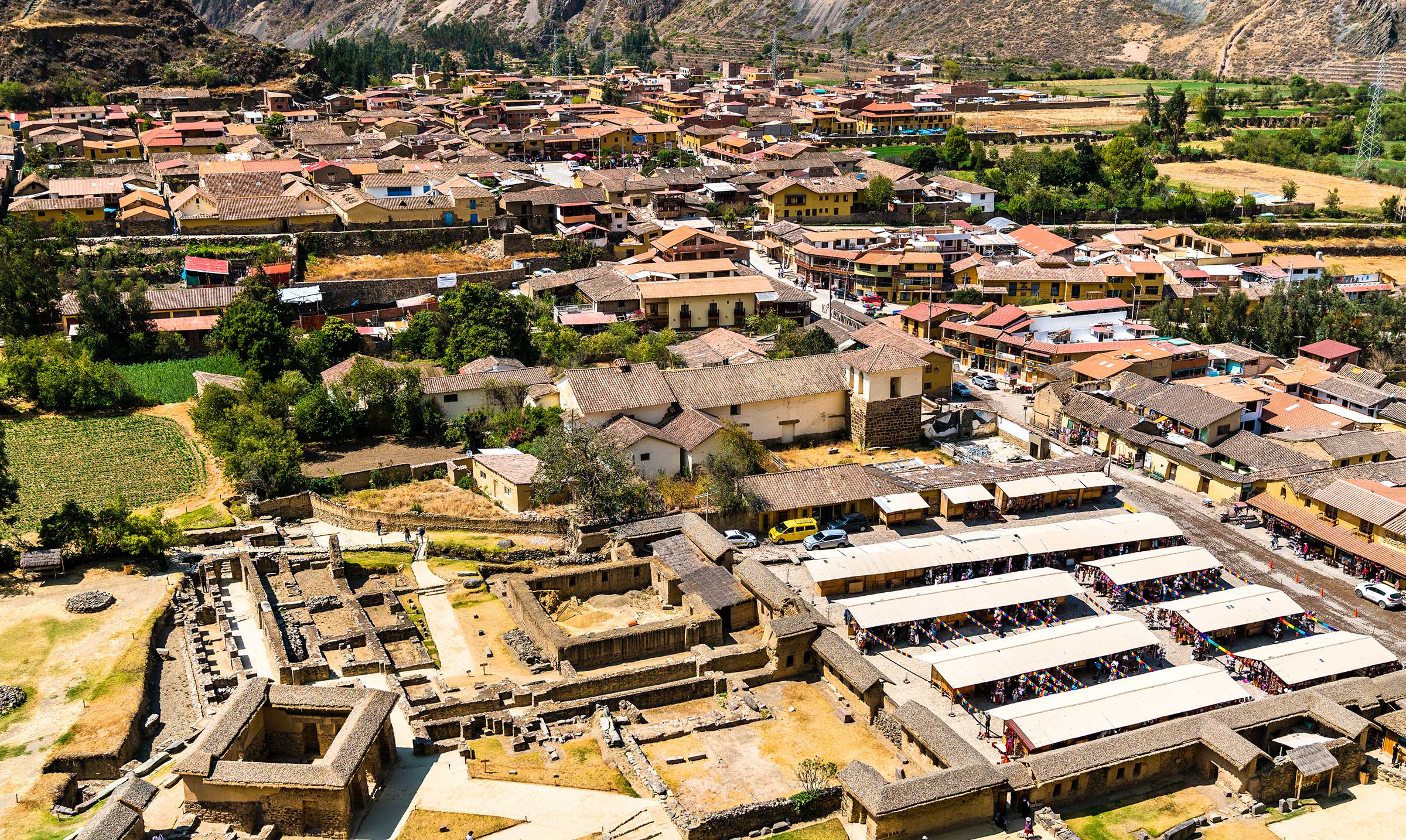 Legend has it that Ollantay was a rebel Inca general who took arms against Pachacutec over the affections of Lord Inca’s daughter, the Nusta Cusi Collyur. However, historical evidence shows that a fourteen-kilometers canal that still feeds the town today did build to bring water here from the Laguna de Yanacocha, probably Pachacutec’s private estate.

The later Inca Huayna Capac does think to have been responsible for the trapezoidal Plaza Maynyaraqui and the largely unfinished but impressive megalithic temples. 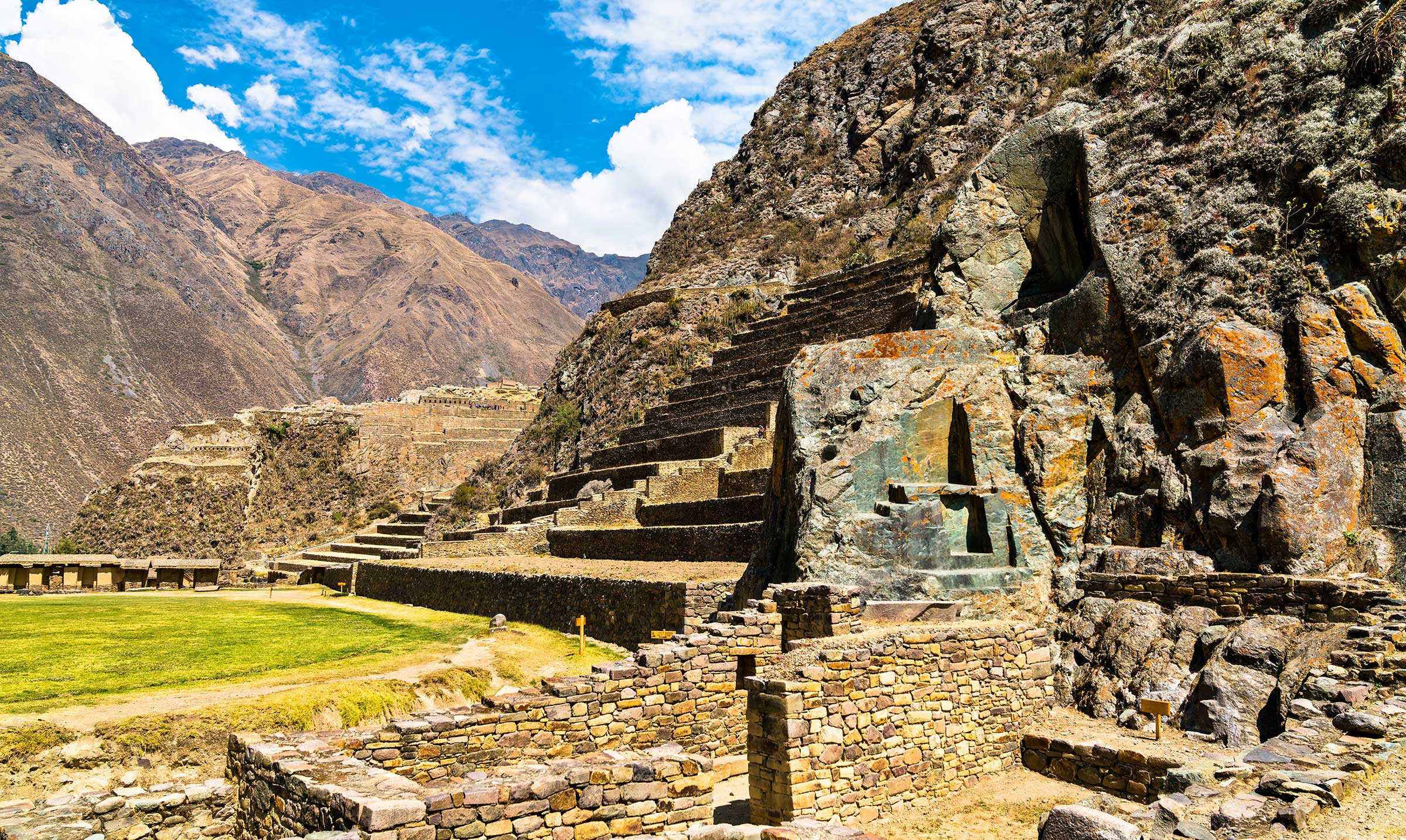 This was the only Inca stronghold to overcome persistent Spanish attacks as strategic protection for the entrance to the lower Urubamba Valley and an alternative gateway into the Amazon via the Pantiacolla Pass. After the unsuccessful siege of Cusco in 1536–37, the rebel Inca Manco and his die-hard force withdrew here, with Hernando Pizarro (Francisco’s brother), some seventy horsemen, thirty foot-soldiers, and a large contingent of native troops in hot pursuit.

As they approached, they found that not only had the Incas diverted the Río Patacancha, making the valley below the fortress impassable, but they had also joined forces with neighboring jungle tribes forming a massive army. 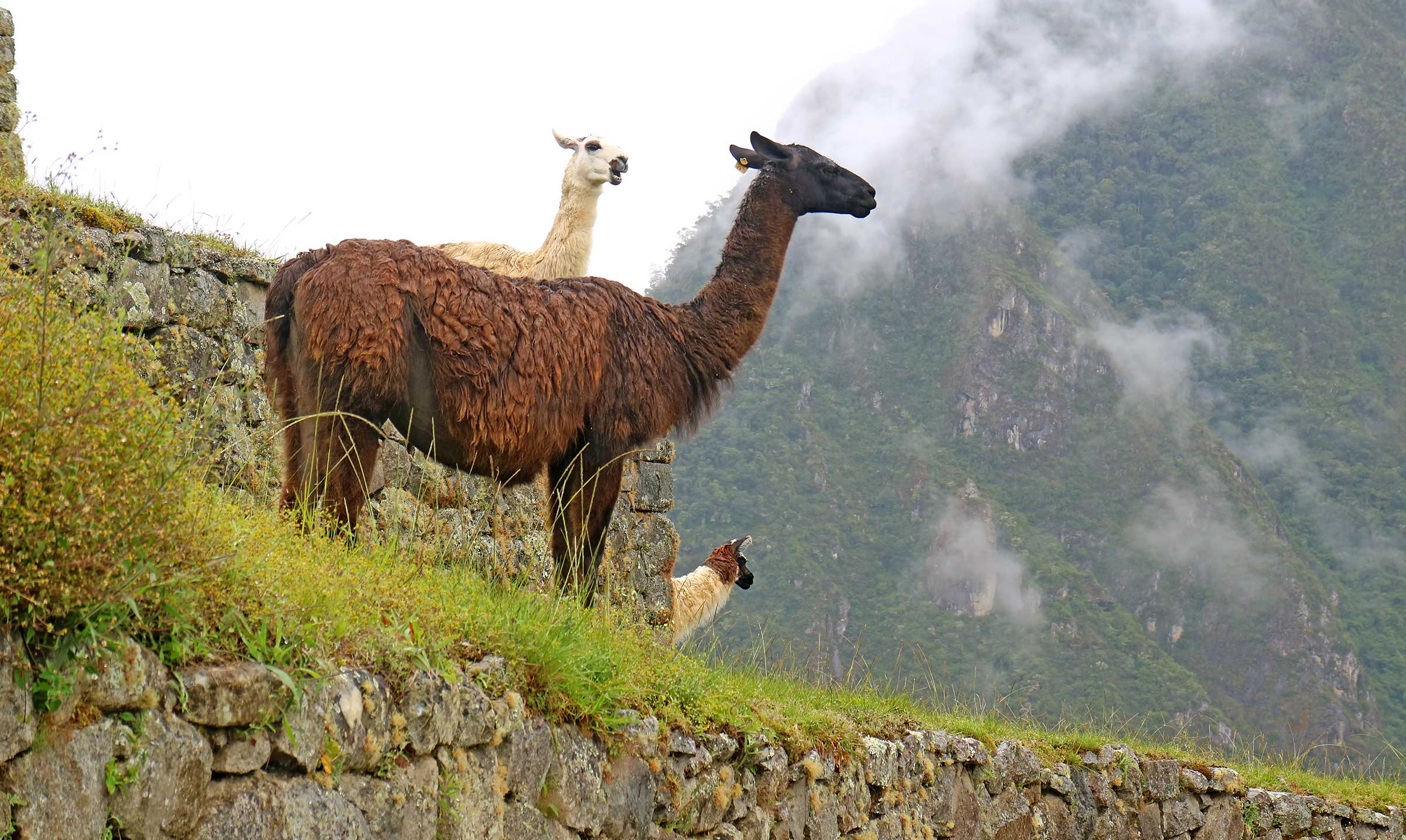 After several desperate attempts to storm the stronghold, Pizarro and his men uncharacteristically slunk away under cover of darkness, leaving much of their equipment behind. However, the Spanish returned with reinforcements, and in 1537 Manco retreated further down the valley to Vitcos and Vilcabamba. In 1540, Ollantaytambo was entrusted to Hernando Pizarro, brother of the Conquistador leader.

During the next four hundred years, Ollantaytambo remained a predominantly agricultural town, little more than a quiet marketplace and nodal point for a wide-ranging peasant population.

Since the agrarian reform of 1968, Ollantaytambo has been divided into five rural communities, each with an elected president and a committee of regidors representing peasant interests within the local government.

Outside of bus and train connection times for Machu Picchu, it’s still a quiet town today, though the peace was shattered once or twice by terrorist raids on the police station in the plaza during the late 1980s and early 1990s

Arrival and information from Ollantaytambo to Machu Picchu

The train station is a few hundred meters down Avenida Estacion (also known as Avenida Ferrocarril), on the left after the Hotel Sauce as you come down from the plaza towards (but well before) the Cathedral or Templo de Santiago Apóstol. 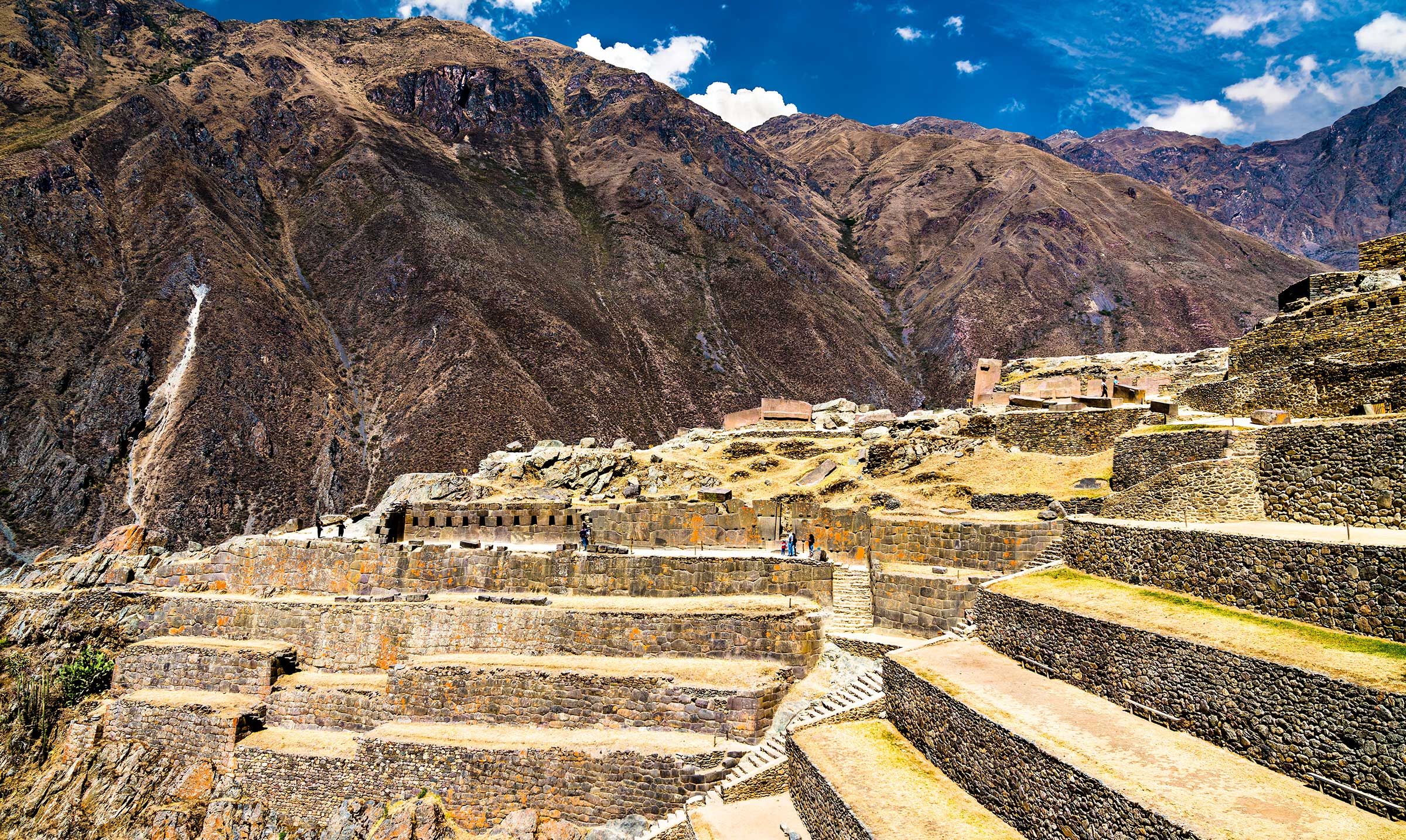 Tourist information can be obtained from the CATCCO Museum, one small block from the plaza, or T204024 or 204034. There are a few internet cafés in town, but the best – like Cyberpath – is opposite the Cathedral. Money exchange is available in the small shop on the corner of the plaza with Calle Ventiderio.

Several hotels to choose from, but the better ones are often fully booked weeks ahead.

The center of activity is the central plaza – the heart of civic life and the scene of traditional folk dancing during festive occasions – the Inca fortress, the market below it, and the train station. The worthwhile Ollantaytambo Heritage Trail helps you find the most important sites with a series of blue plaques around town. 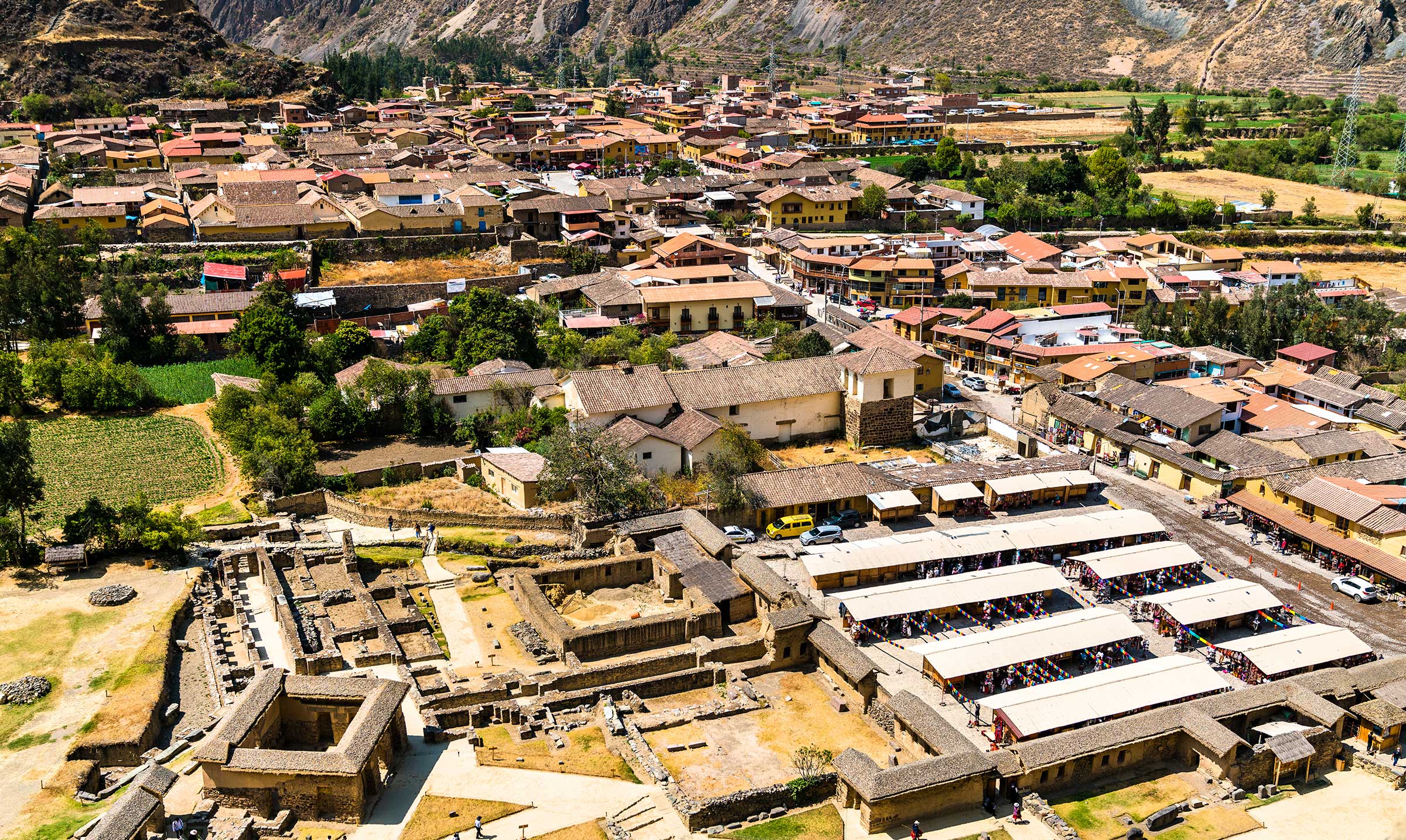 Close to the central plaza, there’s the CATCCO Museo (Tues–Sun 10 am–1 pm & 2–4 pm), which contains interpretative exhibits in Spanish and English about local history, culture, archeology, and natural history. It also has a ceramic workshop where you can buy some good pottery.

Downhill from the plaza, just across the Río Patacancha, is the old Inca Plaza Mañya Raquy, dominated by the fortress. Market stalls in the plaza, a few artisanal shops, and coffees, mainly opposite the beautiful but smallish church, the Templo de Santiago Apóstol. Built-in 1620, it has an almost Inca-style stone belfry containing two great bells supported on ancient timber. The church’s front entrance does surround by a simple yet attractive mestizo floral relief painted red and cream.

Climbing up through the fortress (daily 7 am–5.30 pm; entry with Cusco Tourist Ticket), the solid stone terraces and the natural contours of the cliff remain frighteningly impressive.

Above them, huge red granite blocks mark the unfinished sun temple near the top, where, according to legend, the internal organs of mummified Incas were buried. A dangerous path leads from this upper level around the cliff towards a large sector of agricultural terracing, which follows the Río Patacancha uphill.

At the same time, you can still make out the shape of a large Inca Plaza at the bottom, through which stone aqueducts carried the water supply. Below the ruins are the Andenes de Mollequasa terraces that look like a pyramid from the other side of the Urubamba Valley (a 20min walk up the track from the train station).

High over the other side of the Río Patacancha, behind the town, are rows of ruined buildings initially thought prisons but now considered likely to have been granaries. In front of these, it’s pretty easy to make out a gigantic, rather grumpy-looking profile of a face carved out of the rock, possibly an Inca sculpture of Wiraccochan, the mythical messenger from Viracocha, the major creator god of Peru.

According to sixteenth & seventeenth-century histories, such an image was indeed once carved, representing him as a man of great authority. This particular image’s frown certainly implies presence, and this part of the mountain was also known as Wiraccochan Orcco (“peak of Viraccocha’s messenger”).

Looking back towards the main Ollantaytambo fortress, it’s possible to see the mountain, rocks, and terracing forming the image of a mother llama with a young llama, apparently representing the myth of Catachillay, which relates to the water cycle and the Milky Way.

The Sacred Valley of the Incas – Myths and Symbols (available in most Cusco bookshops), written by Cusco archaeologists Fernando and Edgar Salazar, is a helpful companion for identifying and interpreting the sites in this part of the valley.

For a decent meal, it’s hard to beat El Albergue Ollantaytambo, which is only open to residents except by prior reservation but has a great cook whose food betrays a North American influence. 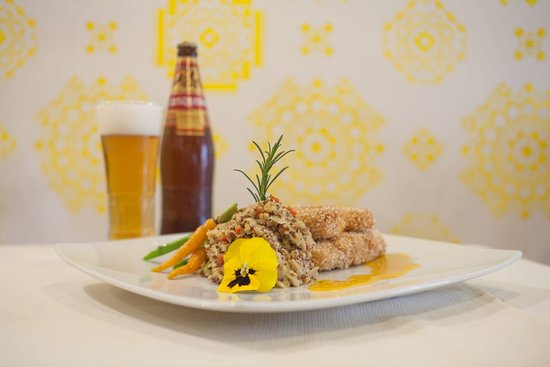 There are also several good cafés closer to the center of town, particularly around the bridge at the top of Avenida Estacion (also known as Ferrocarril) and in the central plaza.

If you want to try the local chicha maize beer, pop into any private house displaying a red plastic bag on a pole outside the door – the beer is cheap, and the hosts are usually amiable and great fun. In the old days, they used red flowers rather than plastic bags to indicate which family in the village had enough chicha beer to share with friends and neighbors.

Trekking and rafting around Ollantaytambo

Ollantaytambo does surround by stunning countryside, skyscraping mountain peaks, and attractive day-trip options. The Inca quarries of Cachiqata can be reached in four hours on horseback with one or other tour companies listed in Cusco or Ollantaytambo. It’s also possible to camp here and visit the site of an Inca gateway or Intihuatana. 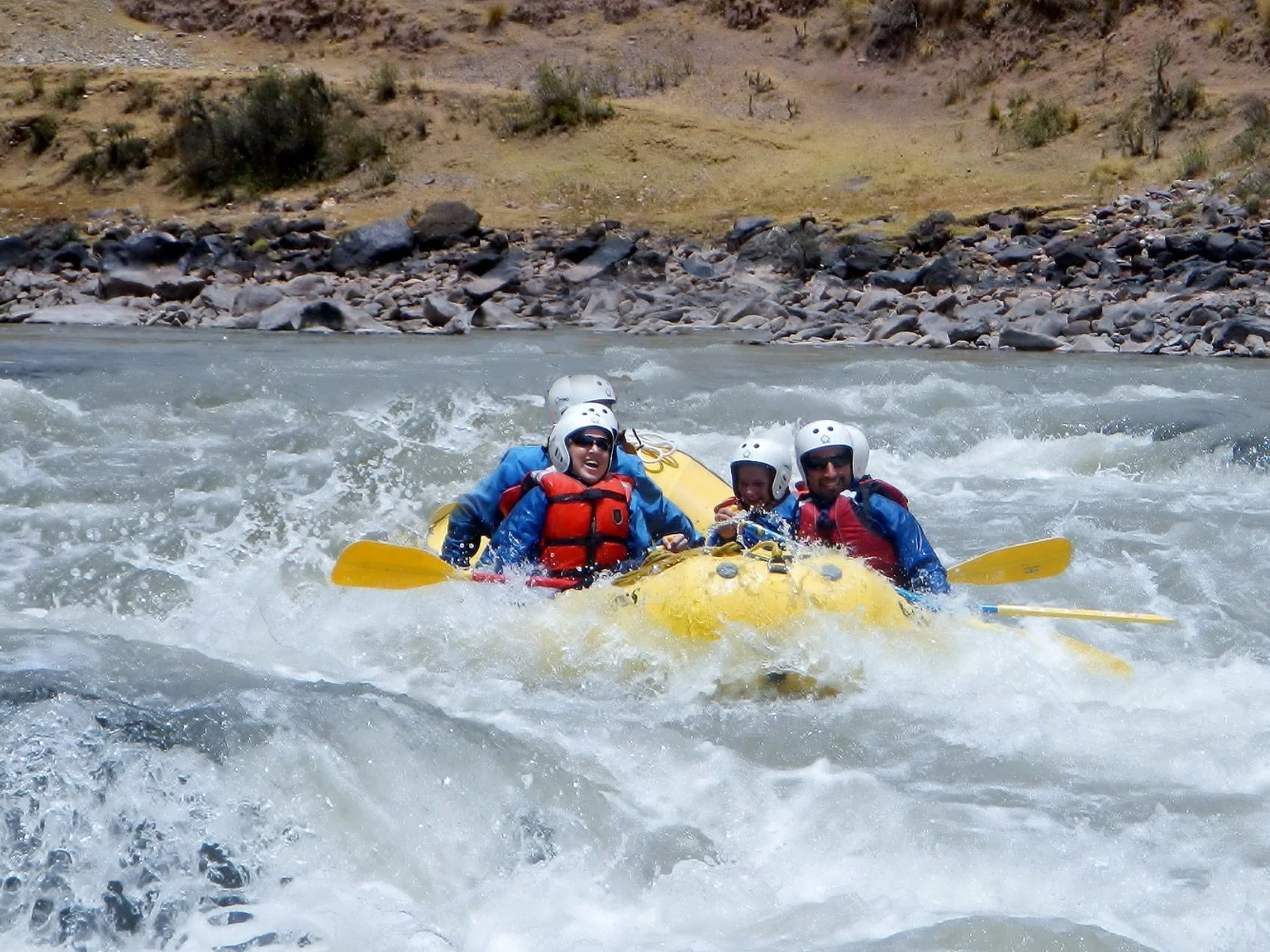 There are the nearer ruins of Pinkuylluna, less than an hour away by horse, or the Pumamarca Inca ruins about half a day out.

The area around this town is also an excellent spot to begin trekking into the hills. One possibility is to head along the main down-valley road to Km 82, where a bridge over the Río Urubamba is becoming an increasingly popular starting point for the Inca Trail and Salcantay. There’s a hard-going two-day trail to Yanacocha’s beautiful and remote lake.

Alternatively, traveling up the Río Patacancha will take you to the little-visited Inca ruins of Pumamarca, on the left of the river where the Yuramayu river merges with it under the shadows of the Nevada Helancoma. The main track carries along the right bank of the Río Patacancha through various small peasant hamlets – Pullata, Colqueracay, Maracocha, and Huilloc – before crossing the pass, with the Nevada Colque Cruz on the right-hand side. It then follows the Huacahuasi river and Tropoche down to the valley and community of Lares, just before which are some Inca baths.

Beyond the village are several more ruins en route to Ampares, from where you can either walk back to Urubamba, go by road back to Cusco or head down towards Quillabamba. It’s at least a two-day walk one way, and you’ll need camping equipment and food as there are no facilities on the route.

Contact the South American Explorers’ Club in Cusco for recent trip reports and good maps. It’s also possible to do it on horseback via most tour companies here or in Cusco or organize a guided trek with an agency in Cusco.

The local Museo CATCCO (T204024) also has information on what they promote as Ancestral Routes of Ollantaytambo. This adventure is an entire list of walking circuits that link essential points relating to the archaeology or history of the area.

Alternative treks to the Inca Trail

There are three main trekking routes that Cusco-based adventure tour operators have developed in response to the desperate over-demand for the Inca Trail. The most popular of these is Choquequirao, and like the Inca Trail, this trek ends at a fabulous ancient citadel. Hikes around the sacred glaciated mountain of Salcantay are also well-developed and, to some extent, overlap with and link to the Inca Trail itself.

Much less walked, but equally breathtaking, is Ausangate, another sacred snow-covered peak (with a convenient looping trail) that can be seen on a clear day from Cusco dominating the southern horizon.