The Inca era known as Qaqyaqawana (which in Spanish means “place from which you look at thunder“) Huchuy Qosqo does locate in the district of Lamay, within the province of Calca, Cusco, specifically in a plain found on the top of a mountain. At an altitude of 3 550 meters above sea level. Thanks to the “Ministerio de Cultura,” it is currently considered Cultural “Heritage of the Nation.”

How to Reach Huchuy Qosqo

Due to the narrow road, it is necessary to make a trek. The trek lasts 03 hours from Lamay. On the other hand, you can also go from Chinchero, using half a day of pilgrimage. And if you want to make a trip to the site of a longer duration, in which you need to camp, you can take the route from the City of Cusco, as this route takes a whole day.

The entrance to the site costs S/20. Recommended the company of tour guides or groups. Another recommendation is that this route is carried out in the dry weather period, between April and October, to avoid the slippery area due to the rains. 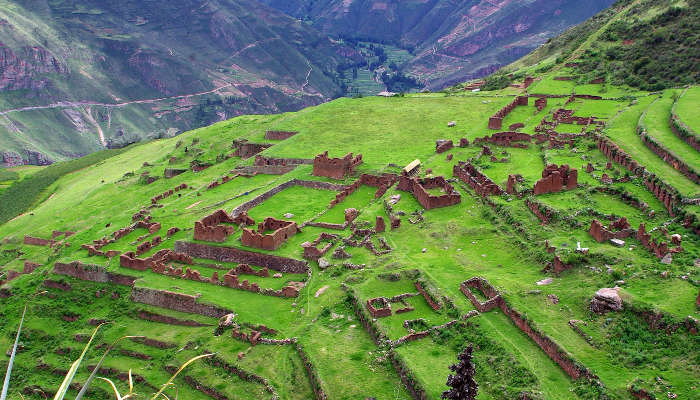 Historically, this site is known to be the favorite place of the Inca Wiracocha, which it chose as a place of rest and retreat and where, according to the myth, it died at an advanced age (80 years). It also said that different ethnic groups already populated this area before the Inca arrival, so they had to expire previously. Another fantastic story about the site is that the Inca Wiracocha would not have arrived only there. But in the company of his son: Inca Urco, the worst ruler of the Empire, who left the Tahuantinsuyo to their fate after the Chanca attack that ended up being stopped by His other son “Cusi Inca Yupanqui.” Finally, another reason that makes this site important is discovering a mummified body, found during the Conquest, and attributed to the old Inca monarch, although later burned by the brother of Francisco Pizarro.

There is an excellent view of the snowy Pitusiray along with the town of Calca.

There are architectural remains that appear still preserved; there are at least 02 buildings. We can observe one of three floors without the name; a mixture of building materials characterizes this first construction. Since the two lower levels do make from carved stone, the latter preserves an adobe-based structure. The second building, also without a name, is a rectangular base construction made with Adobe, believed to have had the purpose of being a space for the apprenticeship of the women of the Empire. There are also relics of remains of smaller enclosures almost destroyed because of natural events, including rainfall and vegetation in the area.

How to plan my trip to Peru

Planning is one of my favorite parts of a trip since/when I discover everything I want to do at a pa
Read More ...

Huchuy Qosqo is one of the best alternatives for those travelers who love adventure and want to take
Read More ...

Reasons to do the Rainbow Mountain Tour

Relate with the Andean Culture This hike to Rainbow Mountain offers you to know the traditional expe
Read More ...

Preparation for the Inca Trail Trek

We are happy that you have decided to venture to fulfill one of your dreams that few hikers around t
Read More ...

Short Inca Trail The second day, depending on where you have spent the night, continue your adventur
Read More ...

WHAT TO BRING for the 1-Day Rainbow Mountain Tour

The Rainbow Mountain or Vinicunca is one of the mountains located in the Vilcanota mountain range, a
Read More ...

Surely you have heard of a mountain that has the colors of the Rainbow, or you have seen on social n
Read More ...

There are so many beautiful destinations to explore outside of Cusco, Peru. You can enjoy various ad
Read More ...

When in doubt about the Short Inca Trail, the best thing to consult a travel expert. Kondor Path Tou
Read More ...

For nature and adventure lovers, especially those who want to get to Machu Picchu through the Inca T
Read More ...