CUSCO is located at 13 ° 30’45 “south latitude and 71058’33” west longitude from the Greenwich Meridian; it is located in the central part of the department of the same name. In the last times of the Pleistocene Period of the present Quaternary or Anthropozoic Age, a hundred thousand years ago, these soils were a bed called lake Morkill. In general, it had a circular form and extended by the southeast to the place today Called Angostura. Precisely because of the narrowing of the Watanay valley; In the same continuous course, another lake to the present called Kunturqaqá, one kilometer below the locality of Oropesa; And the third successive lake, in Muyuna, present Wakarpay and Lucre, 30 kilometers from the city of Cusco.

A millennium ago, the soils that today give the city of Cusco were home to essential tribes in development, which constituted the fabulous capital of the Inca empire, center, and navel of the world over the centuries. One of the most imposing Pizarro, “The Very Noble and Great City of Cuzco,” remained the main economic and cultural center throughout the sixteenth century, officially considered by the crown of Spain.

Cusco stands located on the 3,350m, in a geological zone that is the head of the valley of Watanay. The town’s climate and the area that contains it, in general, are good, comfortable, and healthy for human life stable. The difference between the seasons is hardly perceptible to the year; Two seasons are well marked, the rainy season (spring and summer) and the dry season (autumn and winter).

The temperature is temperate and almost uniform during the year, with a slight increase in the cold in winter when the roofs and grasslands dawn frosty. So in these places, in the morning twilight, the temperature drops to zero degrees Celsius, But at midday, when the sun’s rays unfold in the rain, it rises to more than 20 ° C. The annual average temperature oscillates between 10 ° C. And 12 ° C. 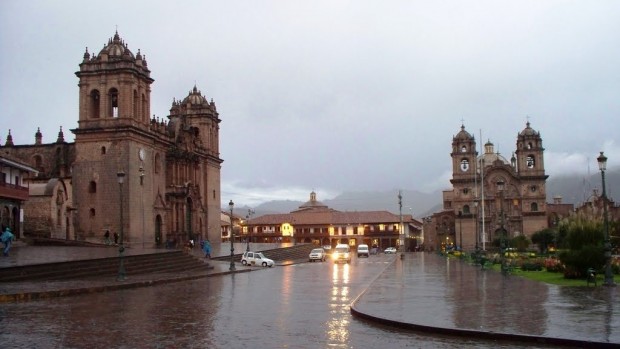 The city of Cusco on a rainy day

Cusco is a unique city, unlike any globally, both in physical and social aspects. It does sculpt in different types of stone like diorite, andesite, basalt, and limestone; They Are peculiar ecological expressions due to being built at considerable altitudes on the Andes.

It is the oldest living city in America; it survives without a solution of continuity in time and comes from the prehistoric penumbra. And yet does not age, exhibiting the Andean culture, which retains a high percentage of its ethnic peculiarities, with its current language and the beautiful language of the Incas; Thus, it is undoubtedly the cradle of Peruvian nationality. In Cusco was founded the Homeland; here was born Peru; in its streets and people, the past is present, indicating paths for the future.

Many millennia ago, many human groups developed scattered and spontaneously in different parts of what is now Peru, Bolivia, Ecuador, central and northern Chile, north Argentina and southwest Colombian. What integrated them into a single state, whose center was Cusco, with a historical sequence that varies in nuances but is not interrupted. The city was the head of ancient cultures, unified under the wise leadership of the Incas. They made it the capital of the Empire of the Sons of the Sun and gave it morphological contours by mimicking the most crucial feline in this part of the world.