Choquequirao is the sacred sister of Machu Picchu because it has structural and architectural similarities. The archaeological monuments are terraces distributed on levels leveled and fenced with stones to form a platform of approximately 150 square meters.

The ruins of Choquequirao do locate at 13° 32′ latitude and 77° 44′ west longitude, at 3033 meters above sea level in the mountains of the snow-capped Salkantay to the north of the Apurimac River in the district of Santa Teresa, province of La Convencion, department of Cusco.

How to get there

To get to the last Inca fortress is by land; the best-known route to Choquequirao is taking the road to Abancay, and at km 154, choose the detour that will direct you to the town of Cachora.

The route to Choquequirao has narrow roads, so you have to walk carefully and have excellent physical condition and the right equipment to make this hike.

Due to its altitude, Choquequirao enjoys a temperate climate. However, it is necessary to emphasize that the Choquequirao trail is warm due to the Apurimac canyon.

It does locate at 13° 32′ south latitude and 72° 44′ west longitude. It does find at 3035 m.a.s.l. in the foothills of the Salcantay snow-capped mountain, north of the Apurimac River valley, in the province of La Convención in the department of Cusco. It is approximately 47 km. from the town of Cachora (department of Apurimac).

We can mention that the environment of Choquequirao is one of the richest in biodiversity. All these species did condition despite the temperature variations as it is sun during the day and inclement frosts during the night. The fauna of the place is mainly composed of condors, tarucas, viscachas, foxes, skunks, pumas, hummingbirds, spectacled bears, and the famous cock of the rock, the national bird of Peru. The flora includes giant ferns, ichu, and a great variety of orchids, especially the Wakanki variety.

Due to its geographical position, Choquequirao has a warm climate alternating with cold temperatures at night. The average annual temperature is 17ºC. 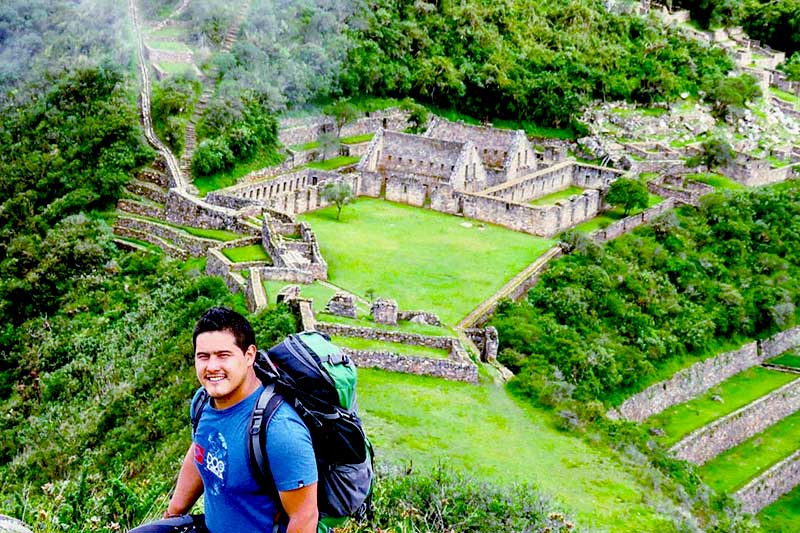 It was a cultural and religious center for the region during the Inca civilization. It does presume that this citadel was used as a checkpoint to ensure access to the areas of Vilcabamba, which connected the jungle with other vital centers such as Pisac and Machu Picchu. It is also estimated that the citadel played an essential role in securing the Inca empire’s Amazon jungle and the capital (Cusco).

In the transition period that lasted approximately 40 years, Choquequirao is considered one of the Incas’ last bastions of resistance and refuge. By orders of the Manco Inca, they abandoned the city of Cusco to take shelter in the towns of the Vilcabamba region when around the year 1535, Cusco did control by the Spaniards. It was in this place (and in general in the entire Vilcabamba valley) where Manco Inca and the last Inca descendants of Vilcabamba resisted the attack of the Spaniards until the capture and execution of Tupac Amaru I that happened in the year 1572.

Choquequirao (from the Aymara words Chuqui, gold, and the Quechua K’iraw, cradle, that is: “cradle of gold”) is another archaeological site also known as an Inca citadel does locate between the branches of the snowy Salkantay in southern Peru. These archaeological remains of Choquequirao are comprised of a group of buildings and terraces distributed on different levels, from the lowest level Sunch’u Pata to the highest truncated summit, which was leveled and fenced with stones to form a platform with an approximate area of 150 square meters.

Choquequirao (sometimes also referred to as Choqequirau or Choquekiraw) is also known as the “sacred sister” of Machu Picchu for the similarities presented structurally and architecturally with it. Not long ago, this majestic place became known, thus awakening the interest of many tourists and researchers.

The environment of Choquequirao is one of the richest in biodiversity; however, biologists, ecologists, and experts say so in this area. Despite this deficiency and the few scientific studies conducted, it is not known precisely the number of plants and animals that exist. It has been able to determine the existence of various forms of life.

Among the most relevant species are the condor, the fox, the skunk, the puma, the spectacled bear, the Taruca, the vizcachas, the flower pickers, the high-altitude toucan, the quetzals, and the ocelots. Despite temperature variations such as the sun and the inclement frosts at night, all these specific conditions. In this space, you can also appreciate the cock of the rock, the national bird of Peru.

On the second day, depending on where you have spent the night, continue your adventure to Choquequirao.

The distance from Capuliyoc to Choquequirao is 22 km, and the walking time varies between 10 to 12 hours.

This route is ideal for the more adventurous, as it is the shortest route. But it also presents the steepest, most dangerous, and most demanding trails. The road from Playa San Ignacio to Choquequirao is steep, and there are no campsites or services along the way.

To get to Choquequirao through Huanipaca, follow the exact directions through Cachora and head towards Curahuasi or Ramal de Cachora. From there take an express to Tambobamba (punta carretera). There is no cab service from the Huanipaca branch, so you will have to get off at the Cachora branch and take an express cab to Huanipaca, Tambobamba, or Punta-Carretera.

From Tambobamba, descend to San Ignacio beach (on the banks of the Apurimac River) and begin the ascent to Choquequirao through the winding road that winds through the steep slopes of the rugged mountain.

Hiking time through Huanipaca varies between 10 to 12 hours one way.

Cusco – Santa Teresa – Yanama – Maizal – Choquequirao
It is the longest route and is only traveled by lovers of long walks. The travel time for this route varies between 8 to 9 days. What can travel it in both directions: entering from Santa Teresa and leaving for Cachora, or the other way around?

If you want to get to Choquequirao by this route, it is best to hire the services of your trusted travel agency. Since the distance you will walk (more than 70 km) will be much greater than the previous routes. In addition, the road passes through dangerous and little-traveled places. Therefore, you will need a guide and muleteers to accompany you during your trip.

Travelers who go through this route mainly visit the Historic Sanctuary of Machu Picchu and the Choquequirao Archaeological Complex. Passengers who have completed this trip say it is the best experience. The most popular route is entering through Cachora and ending the journey in one of the wonders of the modern world, Machu Picchu.

This route is of recent creation and is little frequented. It offers the best views of the Apurimac Canyon. But, it is the least recommended because there are no services on the route, and the road is very precarious.

To get to Choquequirao through Mollepata, you go by private car to the town of San Francisco (road end). You start walking through a narrow path that meanders between the slopes of the snow-capped Padreyoc and joins Marampata to the road to the Cachora – Choquequirao route.

Through Mollepata, the distance to Choquequirao is 32 km. And the travel time varies between 13 to 14 hours one way and an equal amount of time to return.

This new access road will cross 1,400 meters above the Apurimac River. This trail will reduce the distance of the road to Choquequirao to only 5.1 kilometers, and the travel time will be only about 15 minutes. It is one of the most ambitious projects for the archaeological center to boost tourism in the southern region of Peru.

The difficulty of the Choquequirao Trek

The trek to Choquequirao has a MEDIUM-HIGH difficulty. It is much more demanding than other trekking routes in Cusco, such as the Inca Trail to Machu Picchu or Salkantay. Therefore, before traveling, you should consider many aspects: time, distance, physical condition, and other factors.